This document describes how to install and configure Tasktop Sync as a Windows service.

Detailed instructions on system requirements, license activation and installation preparation are available in the Installation Guide. Note that you will need to complete the steps on user setup before you can import the license file.

To install as a Windows service, make sure to check the option for it provided in the installation options page of the wizard.

When installed as a Windows service, Tasktop Sync should not run as the Local System account and should be run as a specific user account with the following permissions:

If that is not possible, consult the Known Limitations below for a workaround.

To configure Tasktop Sync to use the Administrator user account:

Note: You must use the Windows Service application to configure the services user account (you cannot use the Tasktop Sync Service Manager). This known limitation is described in the Known Limitations .

Before you can access the UI you must shutdown the Sync service if it is running. To check whether the service is running and shut it down, run the Tasktop Service Manager application (from the Windows start menu) installed as part of the installation process. You will see the following dialog: 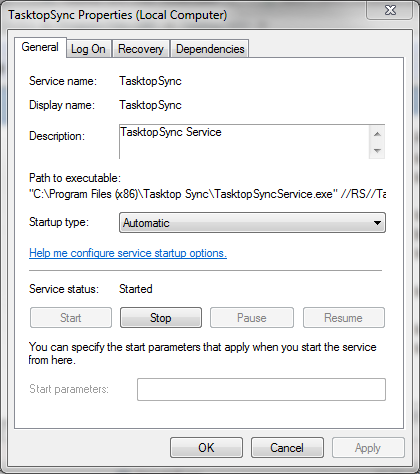 Once the task mapping configuration has been completed and Sync has been verified as working you can resume running it as a service in the background. To do this, exit the Tasktop Sync UI by closing the window or selecting "Exit" from the Tasktop menu.

You may now use the Tasktop Sync Service Manager to restart Sync in the background by clicking "Start."

Tasktop Sync stores log files and other information in a data directory. The location of this directory varies depending on which operating system Sync has been installed on.

Note that these directories are different than the directories used by default if Sync is not installed as a service. See migrating for details.

Starting and Stopping the Service

Starting and stopping the Sync service can be done using the Tasktop Sync Service Manager installed as part of the installation process. You will be asked for an administrator password when running this application because interacting with Windows services requires administrative permissions.

After running this program you will be presented with a dialog:

This dialog contains buttons allowing you to start and stop the service.

Migrating From an Application Only Install

If you have previously installed and configured Tasktop Sync as an application only (i.e. not as a Windows service), it's likely that your configuration folder is in a different location than where the service is expecting. To migrate your configuration to a service install:

The Tasktop Sync user interface does not start and stop the Windows service.

Work Around: See the section on starting and stopping

Tasktop Sync's user interface is not accessible if the service is already started.

The Tastkop Sync configuration files can only be accessed by one process at a time so it's not possible to access the user interface from the application while the service is running.

Work Around: The service must be stopped before starting the application. See the section on starting and stopping the service.

Work Around: Open the Windows Services application by going to Administrative Tools -> Services. Scroll down to the Tasktop Sync Service, right click on it, and select properties. Enter account credentials in the Log On tab.

Credentials in secure storage are not shared when switching the user account Tasktop Sync is being run under.

Work Around: When changing user accounts, start the user interface and ensure that all repository passwords are entered again and saved.

When Running as a Local System User

It's strongly recommended that Tasktop Sync be run using a standard account and not the Local System user (see User Setup ). If this is not possible for some reason there are a number of limitations that will be encountered:

Running the service as a Local System user prevents accessing the user interface when running as an application.

Windows enforces file system permissions such that files accessible by services run as the Local System user are not accessible by programs run as applications. In some cases Windows may seem to allow access to the same file at the same location in the file system, but in fact the files can be different for the service and the application. This can happen even if both users have Administrator privileges. The result of this is that Tasktop Sync when run as an application cannot access the configuration files when run as a service under the Local System account.

When running as the Local System user the Tasktop Sync user interface is not visible in screen sharing sessions.

The interactive desktop feature of Windows services does not allow its window to be visible across remote screen sharing sessions.

Tasktop Sync's user interface is not accessible if the service is already started using the Local System user.

Once the service has been started it's not possible to force the user interface to activate when running as a Local System user.

Work Around: Ensure the service has permission to interact with the desktop , then restart the service.

In RDP sessions the Tasktop Sync user interface is only available on the "console session" of a Windows server.

Work Around: Instead of using the standard Remote Desktop Connection client on your workstation, open up a command prompt and use the following command:

You should replace tasktopsync.example.com with the hostname of the computer running Tasktop Sync in the above command. This command will open a remote desktop session to the Windows server that uses the console session which allows Tasktop Sync configuration to function normally.